Empress Leak is a website known for the publication of child pornographic and adult sexual content. The website records about 600,000 monthly users who are located in Ghana, Nigeria and the United Kingdom.

The Minister of Communications, Mrs. Ursula Owusu-Ekuful revealed this during a joint press briefing held on Monday August 10, 2020 in Accra, to announce the arrest of the operator.

Addressing the media, she noted that, an investigation to clamp down on activities of empress leak was launched after a female Senior High School student, filed a report on January 6th, 2020, with the Computer Emergency Response Team (CERT-GH) of the NCSC. The report by the victim who is below 18 years, was to alert the CERT-GH team of an uploaded sexually explicit video of her to the website.

She said “As part of Government’s efforts towards the protection of Ghana’s cyberspace, the National Cyber Security Centre in 2019 launched a Cybercrime/Cybersecurity Incident Reporting Point of Contact (PoC), to provide an effective mechanism for citizens to report suspected and identified cybercrime and cybersecurity incidents.” The channels are:

The Minister stated that since the operationalization of the PoC, the NCSC has received countless cybercrime/cybersecurity incidents reports from the public. Key among these reports are the publication of non-consensual intimate images (sextortion), online impersonation, online fraud, malware attacks, online blackmail, website defacement, among others. 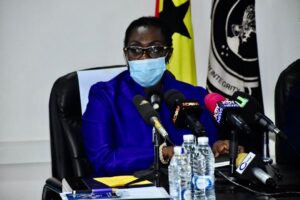 According to her, sextortion and distribution of sexual images of individuals are gradually becoming a canker in the Ghanaian cyber space, due to the trusting nature of most Ghanaians.

“Out of a total of 296 cases received by the National CERT between January 1 to June 30, 2020, 27% of the cases, representing a total of 79 cases, are related to either sextortion, non-consensual sharing of intimate images or child online abuse”, she added.

She stressed that these criminal acts are perpetrated by malicious individuals who build acquaintance with unsuspecting victims on platforms such as social media, dating and adult website through the use of fake identities. 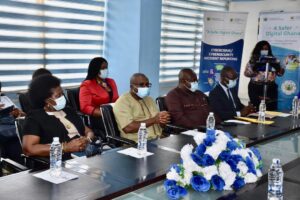 Dignitaries at the press conference

Explaining how these criminals operate, the Minister said, victims are coax to either share nude pictures/video of themselves or perform sexual acts that are secretly recorded. The criminals capitalize on these recordings to extort monies from victims.

Touching on the provisions of the law, the Hon. Minister explained that, “Child pornographic content and the act of extortion constitutes criminal activities under Section 136(1) of the Electronic Transactions Act, 2008 (Act 772) – (c) possesses child pornography in a computer system or on a computer or electronic record storage medium, commits an offence and is liable on summary conviction to a fine of not more than 25 penalty units or a term of imprisonment of not more than10 years or to both, and Section 151 of Criminal and Other Offenses Act, 1960 (Act 29).”

She added that, “Government and its agencies are working assiduously to curtail the prevalence of cybercrimes, however, implored the general public, especially children and young adults to be cautious of the activities of malicious individuals.”

The Director General of the CID of the Ghana Police Service, COP Isaac Ken Yeboah, in his address, mentioned that victims who reach out to the perpetrators of these criminal activities are compelled to pay between GHS 500 to 1,000 via mobile money. 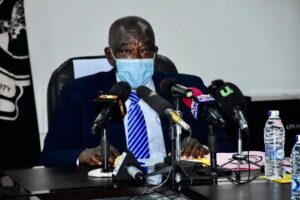 He revealed that the suspect will be charged for obscenity, child pornography and extortion.

Previous How Rawlings made me ‘lock’ ‘inebriated’ Mills in my office – Ahwoi recounts
Next Accra: Four children injured in explosion at La Beach

Powered by WordPress | Designed by TieLabs
© Copyright 2022, All Rights Reserved