The Ghana Police Service has disclosed that the gun used by the landlord who shot and killed his tenant at Ofankor was legally acquired and registered.

According to the police, the weapon was registered in 2007.

“Police investigations have disclosed that the weapon used in committing the crime was legally acquired and registered through due process in 2007,” a statement from the police noted.

The landlord, Victor Stephen Kankam, shot and killed his tenant over the weekend.

The accused earlier told the police that his action was in self-defence after the deceased failed to vacate a two-bedroom house he was occupying at Ofankor in Accra.

Mr. Kankam has subsequently been remanded into police custody  by the Abeka District Court.

The Ghana Police Service in its statement assured that it was still investigating the case.

According to the statement, the Accra Regional Police Command has taken over the case.

“The Accra Regional Police Command has taken over the investigation into the alleged shooting and the killing of a tenant by his landlord on Sunday 24th May 2020. The suspect, Victor Stephen Nana Kankam has been put before the Abeka District Court and remanded into Police custody,” the statement added.

The deceased died from gunshot wounds after he was shot multiple times on Sunday, May 24, 2020 at Spot M near Ofankor in Accra.

According to police, the deceased was brought to the police station unconscious by some persons around 1:45 pm.

The complainant alleged that the deceased had been shot by his landlord for refusing to vacate a room rented out to him.

“The former reported that on the same day at about 1:33 pm, victim’s landlord, Victor Stephen Nana Kankam shot the victim for refusing to vacate a room he rented from him. Police rushed the victim to Police Hospital, but he was pronounced dead on arrival,” the police said in a statement.

“The district commander DSP MR. George Asare and his team proceeded to the scene of the crime at Spot M and saw a pool of blood at the entrance of the main gate of the deceased’s rented apartment. Four spent shells were retrieved at the scene,” the police added.

Read the release from Ghana Police Service below 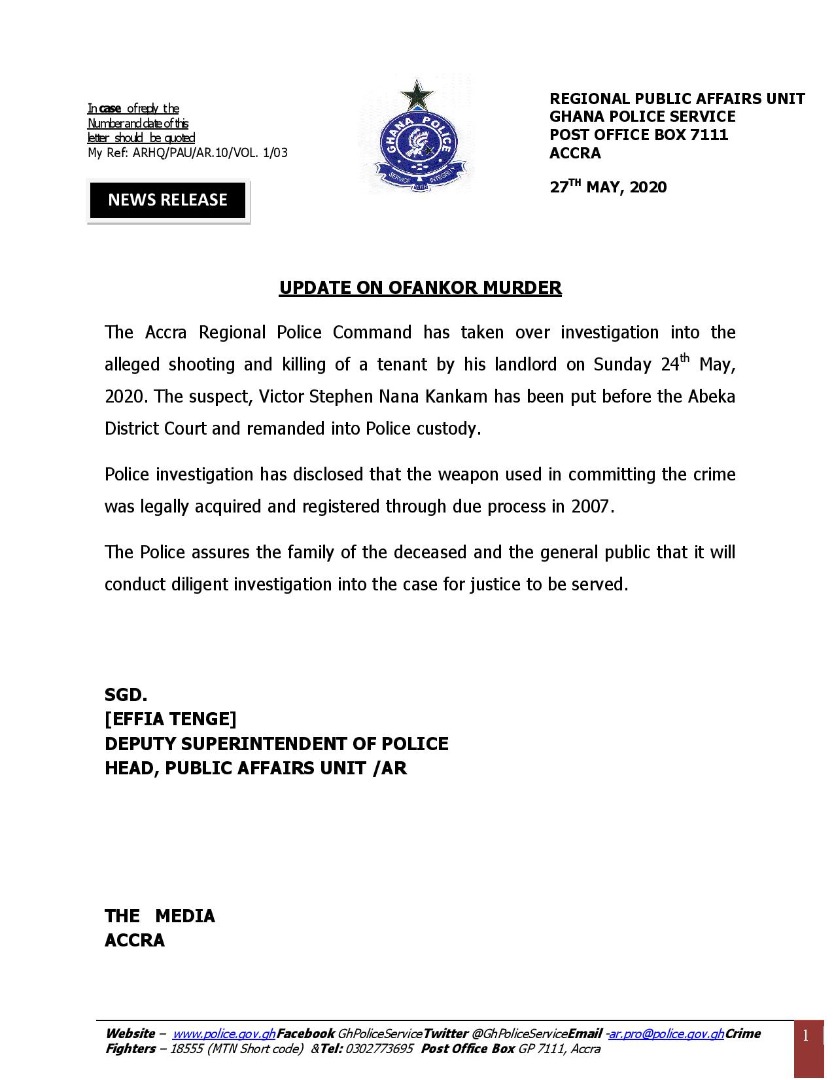 Kanye West says he is running for US president