NPP primaries: Akufo-Addo would be vetted even if he runs unopposed – Sammi Awuku

Accra Brewery Limited (ABL) donated hospital equipment and food items to the Adabraka Polyclinic and the Princess Marie Louise Children’s Hospital respectively as part of its Better World Agendawhere we invest in a Growing World to improve the livelihood of residents in the Adabraka community and its surrounding neighborhoods.

The Legal and Corporate Affairs Director of ABL, Ms. Adwoa Aaba Arthur, in an interview, mentioned that as a proud part of Anheuser-Busch InBev (ABInBev) the world’s largest brewer, ABL’s agenda is to improve the lives of the people in its surrounding communities where it has operated since 1931.

ABL identified the Adabraka Polyclinic and the Princess Marie Louise Children’s Hospital as the two community health facilities that required support in order to provide adequate health care services to its patients.

Ms. Arthur held a meeting with Dr. Abdul Razak Quao, the Head of Facility at the Adabraka Polyclinic who shared with her that “the hospital’s priority is to improve the conditions of the maternity ward”. 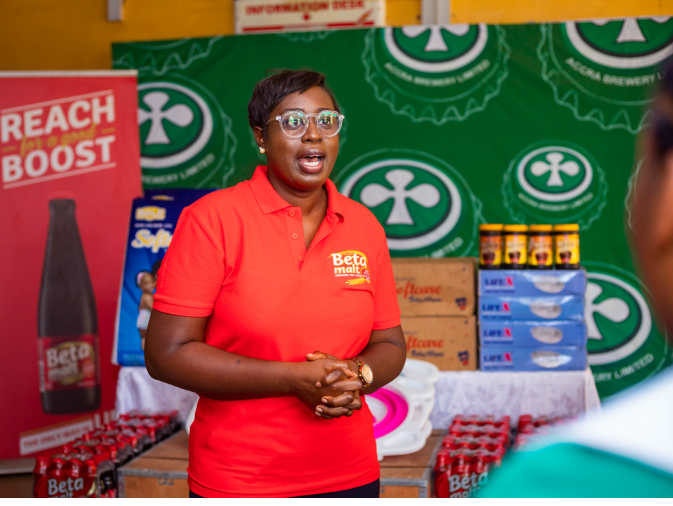 In a similar meeting, Ms. Arthur met with Dr. Maame Yaa Nyarko, the Medical Director of Princess Marie Louise Children’s Hospital. In the discussion, Dr. Nyarko mentioned that “the Hospital required support with food items needed to feed malnourished patients at the Nutrition Rehabilitation Centre and also to cook meals for out-patients visiting the hospital.”

During the interview, Ms. Arthur stated that ABL will continue to donate to these two health institutions every year in order to sustain this initiative, as well as continually improve the lives of the people in the Adabraka community and its surrounding neighborhoods.

She said that “ABL would visit these hospitals every quarter to monitor and evaluate the impact of the respective donations in order to sustain this initiative.”

Ms. Arthur indicated that ABL’s donation was not only to achieve its Better World Agenda, but also to support the United Nations Sustainable Development Goals (SDGs).

She explained that the donation to the maternity ward of the Adabraka Polyclinic supports SDG 3, which focuses on Good Health and Well-Being; and also help reduce mortality rates at the Polyclinic.

She added that the donation to the Nutrition Rehabilitation Center of Princess Marie Louise Children’s Hospital supports SDG 2, which is to eradicate hunger.

She described this as worrying and expressed the company’s immense commitment to contribute to improving the lives of people within its surrounding communities.

Ms. Arthur mentioned that ABL would soon embark on clean up campaigns, a health walk exercise, and a project focused on providing renewable energy to improve education in specific communities.

Previous Expand medical schools to address doctor-patient ratio – Medical & Dental Council to gov’t
Next You hate criticism so much so shut down XYZ, Radio Gold – Mahama to Akufo-Addo